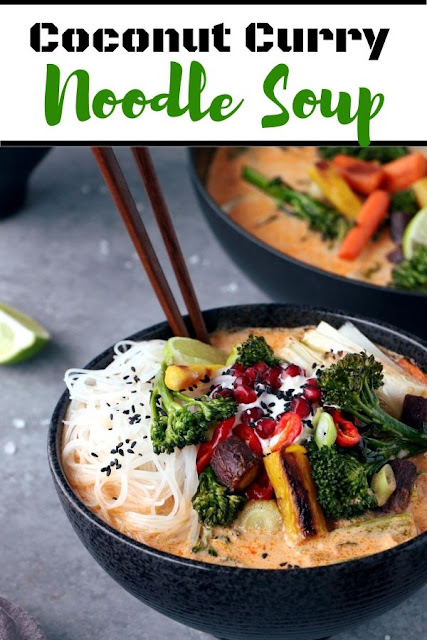 As an ardent fan of absolutely anything having to do with noodles and hot soup, I consider myself to be somewhat of an authority on the subject.
Having posted recipes on Chinese classics like Lanzhou Beef Noodle Soup, and Noodle Soup with Pork and Pickled Greens, this Coconut Curry Noodle Soup is a bit of a departure from our normal fare. It’s has a bit of Thai influence, making use of Thai red curry paste and coconut milk. If that’s not enough for you (though considering what I’ve learned about the awesomeness of TWOL’s readership over the past two years, I highly doubt it), here are a few of the other things this noodle soup has going for it:

1. It’s incredibly simple to make, taking only about 15 minutes from start to finish (No joke. We’re not playing games here).


2. Despite the speediness of its assembly, it has an amazingly complex, flavor. The richness of the coconut milk, the spicy of the curry paste, the tangy bite of the lime, the funky awesomeness of the fish sauce…I’ll stop there, because I’m basically acting like an incredibly annoying Iron Chef judge right now.
3. It can all be made in one…count ’em ONE…pot. Most noodle soups at least require you to boil the noodles in a separate pot, not to mention the other elements of the dish, but not this one. Because it uses thin rice noodles, you can just throw them into the pot at the end and serve almost immediately, or put the dried noodles in a bowl and pour the broth over the top.

Coconut Curry Noodle Soup
Delicious. Think I went overboard on the grated ginger and red curry paste but since hubby loves spicy it was a hit. Will make again but will be careful with the ginger. Maybe add some cooked prawns too.